Skip to content
A Word About Red Oasis
I began Red Oasis back in the mid-2000s. The story, then, was about as crude as my artistic ability, but I cared enough about the idea to teach myself how to draw. Originally it was just me writing and illustrating in my spare time while seeking occasional technical advice from my friends. This however, eventually led to the comic running out of steam and falling into a long hiatus, as ambitious webcomics often do. But a few years ago, my co–creator J. Northcutt Jr. took a far more active interest in the project, refining the story and effectively becoming the head writer. Through our collaboration, I am pleased to say that the project has found new life. I am particularly excited to see where it all goes and I sincerely look forward to sharing that excitement with you.
– John Kent 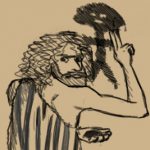 Born on the volcanic plateau of the Independent Region, John Kent is a professional recluse. He surfaces occasionally to paint sweeping landscapes of Oudemans Crater and Arsia Mons, although no original prints exist. Upon completion, each is buried deep in the desert amidst mutterings of “This won’t do at all.” Some say he does this to drive up the value of his portfolio. Others allege numerous and insurmountable cognitive peculiarities. 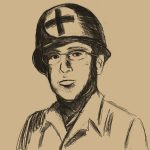 Serving as a medic in the Tharsisian Commonwealth Army’s 2nd Infantry Division, Northcutt received multiple disciplinary actions for malpractice. He has since gone AWOL to pursue a career as a travel writer in various autonomous regions where he was twice ransomed by local militants and subsequently arrested by Xanthian border patrol. At present he is serving out a term in Juventae Penitentiary where he manages a prison library containing only one book, a state issued propaganda pamphlet which he decries as “Painfully derivative of Maoist works.”