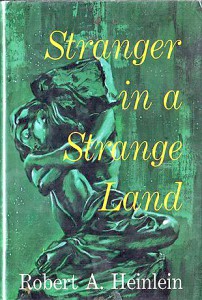 Stranger in a Strange Land is a bit of a head-scratcher, by design. Robert A. Heinlein always said that the reader was meant to supply the answers. Being your average dimwit that needs everything spelled out, I was somewhat stumped by the ending. That is, until I saw the cover art on the first edition. This cover only lasted a year before being replaced by a painting of colorful planets and a half-naked alien that was more appropriate to 60s sci-fi. My suspicion is that the publisher wanted a better visual hook, which is a mistake from a creative standpoint because the first edition cover hints at what Heinlein thought to be important about the book, and even helps to make sense of the final scenes. It has something to do with a bronze sculpture of a young woman who has been crushed under stone: Auguste Rodin’s Fallen Caryatid.

Heinlein explains the origins of this piece, beginning with the caryatid:

“… for almost three thousand years or longer, architects have designed buildings with 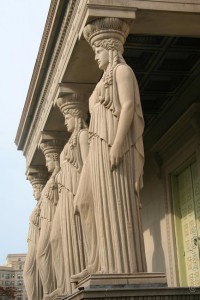 columns shaped as female figures — it got to be such a habit that they did it as casually as a small boy steps on an ant.”

These caryatids, as they were known, were commonplace in Greek architecture. Like the ionic column, they made their way into buildings around the world, from the Porch of the Maidens on the Acropolis, to the Book Tower in Detroit. Caryatids are always pretty, delicate things that effortlessly float tons of stone upon their heads. The hair is often bound in heavy tresses to add structural support for a neck that would be too slender to carry the load. Heinlein again:

“After all those centuries it took Rodin to see that this was work too heavy for a girl. But he didn’t simply say, ‘Look, you jerks, if you must design this way, make it a brawny male figure.’ No, he showed it…”

I went to the Cantor Museum at Stanford University where they have all Rodin’s best known castings, to see his take on the caryatid in person. The museum was full of these creepy, blackened bronze statues, some with distorted forms, others naked and anguished as they look down into the Gates of Hell. Outside in a sunny courtyard, near three sad shades awaiting their internment in the underworld, there she was. 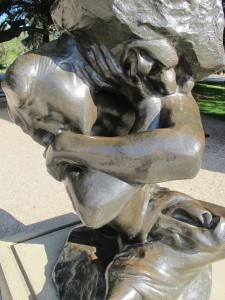 “Here is this poor little caryatid who has tried — and failed, fallen under the load. She’s a good girl — look at her face. Serious, unhappy at her failure, but not blaming anyone else, not even the gods… and still trying to shoulder her load, after she’s crumpled under it.

But she’s more than good art denouncing some very bad art; she’s a symbol for every woman who has ever tried to shoulder a load that was too heavy for her — over half the female population of this planet, living and dead, I would guess. But not alone women — this symbol is sexless. It means every man and every woman who ever lived who sweated out life in uncomplaining fortitude, whose courage wasn’t even noticed until they crumpled under their loads.” 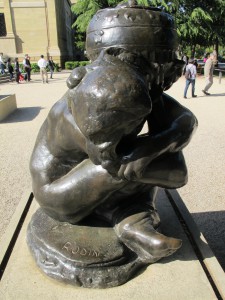 psychology, and how religion can be wielded like a tool to change it. If you don’t recall the ending, (spoilers ahead) the Man from Mars founds a marginal sect called the Church of All Worlds. Like so many fringe movements that began with a sermon or ideology, it does not gain the world’s attention on these merits alone. The Martian surrenders himself to a mob by whom he is stoned, beaten, and shot to death for the crime of blasphemy. It brings to mind the assassination of Joseph Smith or execution of Joan of Arc. Outside the Christian tradition, Islam puts great stock in the martyr shaheed and Buddhism is centered around the notion of self sacrifice. Of course, martyrs are not exclusive to religion, as Socrates knew all too well.

With his death, the Man from Mars turned a cult into a movement. The caryatids went unnoticed until one of their number was crushed under stone.