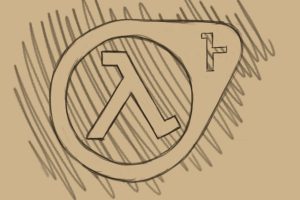 Marc Laidlaw, former writer for the Half–Life game franchise, recently posted a thinly veiled plot summary for the Half–Life 2, Episode 3 that never was. In the wake of the Seven Hour War when alien Combine forces conquered Earth, an untested research vessel known as the Borealis sat in dry dock on the Great Lakes. The Borealis was the culmination of human sciences, beginning with the mastery of gravity in HL2, the manipulation of space in Portal, and finally, time. The ship could do what before only the alien vortigaunts and the G–man could. It jumped to avoid capture, far as it could go, into Antarctica and the future. In the present, Gordon and Alyx fight their way across the icy wastes to board the materializing ship and order another jump into the heart of the Combine invasion nexus where it is to self–destruct. Here, time is interrupted in the familiar pattern, with the G–man’s lurching voice explaining “. . . we’ve places to do and things to be,” except this time it is not you he plucks from the timeline, but Alyx. Now with the Borealis sailing toward the Combine invasion nexus, Gordon is yanked from space–time by the vortigaunts as he bears witness to the crucial moment: a blaze of light, a city among the cosmos, a Dyson sphere consuming the total power of a star, all a mockery of human aspirations. Did we really think that one man aboard a retrofitted luxury liner, representing a race not even ranking on the Kardashev scale, could stop a type II civilization?

The Combine are cousins to, if not within the lineage of Lovecraft’s Great Old Ones who make men servants to their will, but are themselves unassailable. The story’s conclusion is Arthur C. Clarkian, with events left unclear, open–ended, and somehow satisfying. Even Tolkienlike; I am reminded of the first time The Hobbit was read to me, among my earliest memories. Bilbo was obviously being set up to slay a dragon, not outright, but even a five–year–old can see the confrontation clearly laid out. In the end a hobbit will raise an artifact of great power, a sword or ring perhaps, and wreathed in fire he will strike a blow as only St. George or a furry toed Baggins from Bag End could. I have never recovered from the shock when Bard the Bowman, and unknown from outside the story, loosed the arrow that ended dragonkind. I felt so silly. Did I really think that a hobbit could slay Smaug of the thunderbolt tail, hurricane wings, and breath of death? It was a shattering fall from high fantasy of talking eagles nesting in mountain ayres to a reality in which small people play a small, yet vital part in a great undertaking. It felt right, if the Jungian collective unconscious can permeate the sense of mythic rightness in a kindergartener. I did not yet know Beowulf, wherein Wiglaf the dragon slayer is introduced at the very end with the critical qualities of royal lineage needed to smite his own dragon. Bard would not be out of place in Homer’s Iliad where great men are introduced and thrown direct into the fray: Meet Glaucus or Agenor, son of such–and–such and greatest charioteer or discus thrower or boxer. He meets so–and–so on the field and does a great deed forever remembered in songs. An entire life packaged into a few poetic lines. Bard’s black arrow flies true to the heart of this tradition. Likewise, I’m fine with Alyx taking the mantle.

We never did get to see Gordon’s end, which was to be a beginning of a new adventure—not on a 4K monitor with the tessellation turned to ultra. Maybe it will get a proper sequel one day, its own Odyssey, with the events of the first part remembered as an entirely new story is spun. Maybe fans will conclude the story in a non–canonical form, as with Virgil’s Aeneid. It may be that this is all we’ll ever have of Half–Life. But then we never got the end of the Trojan War, did we? The Iliad ended partway through with a coming to terms with death, as I suppose we did with Eli Vance ten years ago. The business with the Trojan horse, the weak heel, and the fall of the great city is a matter of oral tradition that has grown to eclipse the original tale in popularity. Perhaps it is enough that we know Gordon chose sides in the gods’ war—the G–man and his benefactors pitted against the Combine—he snuck into the city of cities in the sky, and he played his part. That is enough for me.

Call this melodramatic if you will, oh and it is, to compare a videogame with the classics. But the connections, however tenuous, are there.

Still, it would have been nice to see that Dyson sphere.