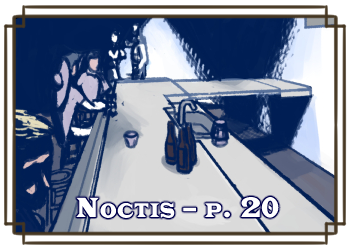 So Page Twenty is now up, concluding the third issue of Red Oasis.

But what about Issue 4? Well, we are working on it and I wish I could say that it won’t be long, but this is still a side project and it will move along at its own pace. What I will say, though, is that I really believe that pace will be faster than before. Noctis was rife with experimentation, big and small, and I regard them all as successful experiments in that they transformed my own artistic uncertainty into confidence. Entering into it, I was uncertain about my own technique and style, uncertain about color theory, perspective, and lettering — but by the time Issue 3 was completed, I was more confident about those areas than I ever was before. The world I draw now looks a lot more like the world I imagine. There are definitely areas where I think I can improve, but I don’t see myself spending a large amount of time trying to experiment with fundamental technique the way I did with this issue. I know what the next installment will look like and I know how to make it happen.

So look for updates in the future as we make progress on Issue 4. I look forward to working on it and telling you all more of this story.